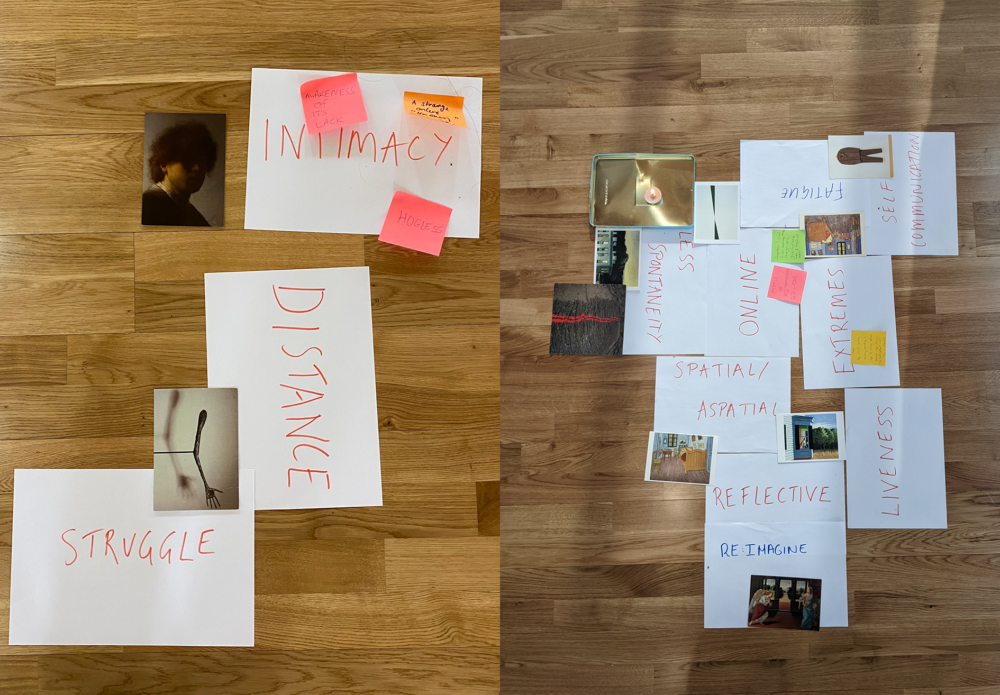 In this blog post we explore the themes emerging from the creative workshops held with artists, and the ways that they interpreted and made sense of the ideas raised in our interviews with healthcare professionals around communicating through Covid.

From January – March 2022, we held a series of creative workshops with artists and creative practitioners. Participants had backgrounds and practices in visual arts, puppetry, dance, theatre, voice, architecture, literature, poetry. These workshops were held in our studio and consisted of reflective, embodied and discussion based exercises encouraging participants to look deeply at their own experiences of communication during COVID and the impacts of the pandemic on their own practice. They were asked to reflect on the themes which emerged from the interviews with healthcare staff from the perspectives of their own artistic discipline, to identify the daily, core activities and skills they use as part of their practice, and to share some exercises or approaches they might use. All conversations were audio recorded and transcribed, and photographs were taken of various images, collages or words created during the workshops.

Whilst we’d originally imagined grouping these workshops by theme and artistic discipline – for instance, one workshop to explore language with writers, poets and playwrights; one exploring non-verbal communication with movement practitioners, puppeteers and dancers; and so on – it became clear that the challenges brought about by COVID were not as clear cut, and so we decided an interdisciplinary approach would be more appropriate. This decision was appreciated by participants – a key theme that emerged through the workshops themselves was the value of random, chance encounters that had been lacking in the past two years and there was a great joy in bringing people together again to share their different perspectives on a phenomenon we collectively experienced.

“So the problem with being on the Zoom screen, the platform, meant that you couldn’t really be anything other than sort of linear and fixed in one way. The rest of the body isn’t in the action of being there. So that led to rigidity and lack of spontaneity and this loss of randomness, which really is quite hard to determine what that means in a social sense. But it’s definitely a lack.”

Like the healthcare professionals, the artists described a loss of human connection and chance encounters, and reflected on the ways that language, modes of communication and environments had changed. They described new and gained perspectives on wider appreciation of the arts, improved spatial awareness, greater understanding of health inequalities and societal inequalities generally, and space for reflection. Strikingly, all of the artists attending described having an established way of conceptualising self-care and an awareness of the need to build their own support systems, whereas when the healthcare professionals did describe self-care strategies, these were borne out of the high pressure of the pandemic rather than something they had in place before. The artists we spoke to were acutely aware of the health inequalities illuminated by the pandemic.

“I hadn’t articulated this before, but from very early on after the first lockdown… [I experienced] a pre-grief about the moment things would go back to normal, even as I was grieving all of the things that were lost. A pre-grief for what would be lost…[for young people] who are neurodivergent, who have disabilities…ways that engagement with the world had become easier.”

We also asked the artists to come up with a list of the daily activities, habits or actions which they employed or used in their work or practice. It was hard for many to pin down in language what were often non-verbal methods reliant on sensation and experience, but as we shared ideas, placing pieces of paper with words written on them on the studio floor, this stimulated ideas in others, so the groups ended up building a kind of map of these action words. 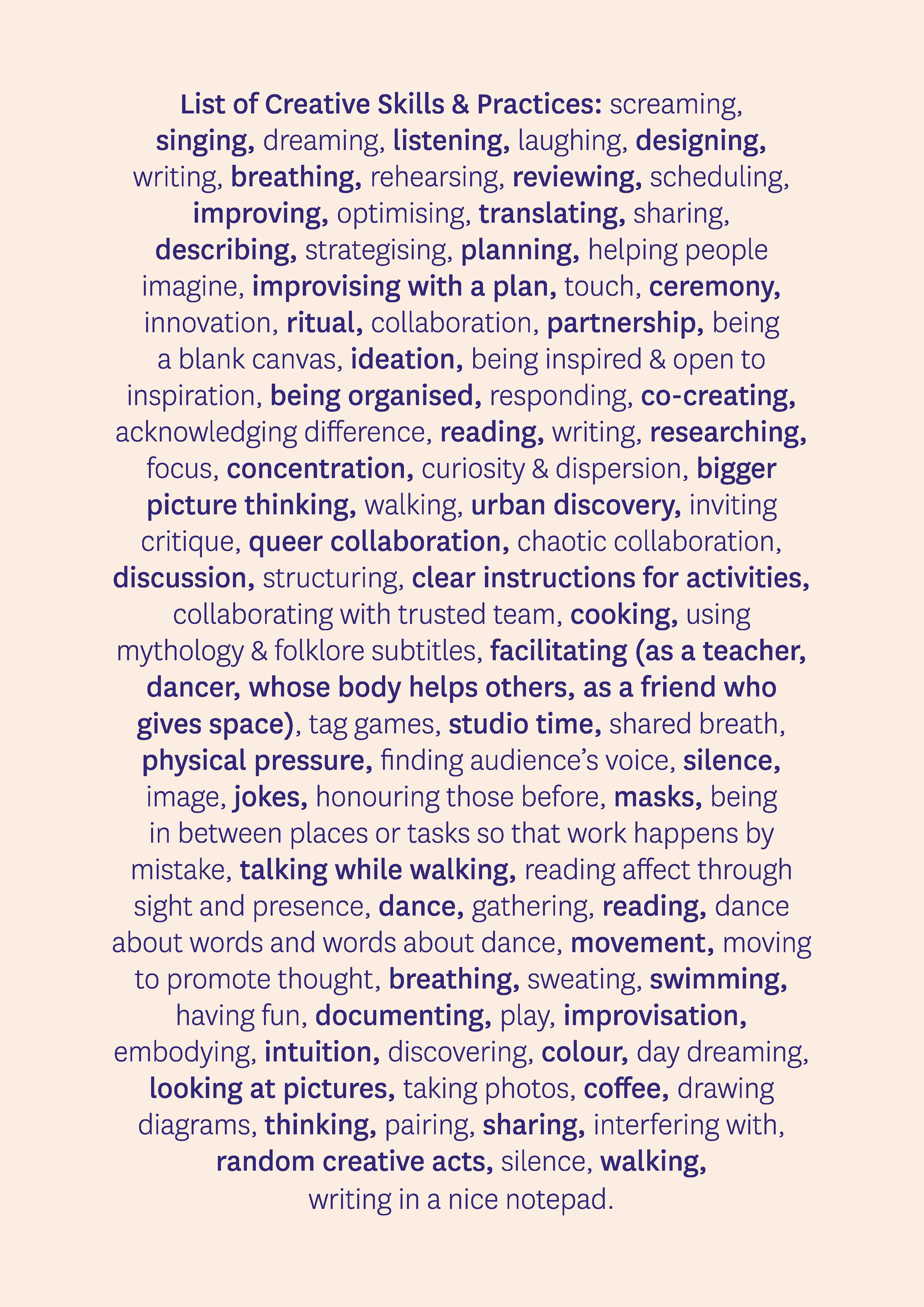 These active words pointed to the centrality of an embodied practice within these artists’ work. Although Performing Medicine’s work has long been about acknowledging the embodied – physical, emotional, subjective – elements of healthcare practice, it was only in the pandemic when spatial, physical, non-verbal restrictions were implemented that acknowledging these embodied elements of healthcare became unavoidable for the healthcare professionals themselves.

Many of the artists at the workshops described their role during the pandemic as facilitating connection and communication, bringing people together through online platforms, providing ways to think about and process what was happening across the globe as well as individually, and creating spaces in which to manage stress and acknowledge loss. They felt able to adapt and respond to the needs of individuals in the room whether online or in person. Their ability to ‘improvise’ within ethical, secure frameworks was identified as a key skill, important if working in fast moving healthcare settings which were very different from site to site, from team to team, from person to person all with differing needs. They adapted to online platforms quickly and creatively, many becoming skilled broadcasters or film directors with time spent on the aesthetics of this new format of delivery – the lighting, the background, how the picture was framed – working out ways to ensure that participants in online workshops felt safe and included.

“There’s still a kind of real catharsis, if that’s the word, around sharing the experience of the last two years and knowing that that experience when it felt really isolating, is actually a really kind of communal one.”

As these skills, reflections and provisional ideas for how artists could support healthcare professionals were laid out, our next step was to curate a series of activities and interventions.

Our next and final blog post in the series describes our response and approach to delivery.

Clod Ensemble is a charity registered in England No. 1064633.
Company number 3251499 (registered charity and company name: The Clod Ensemble).